You must have an order with a minimum of $200.00 to place your order, your current order total is $0.00.
Add to wishlist

The Cambodian Cubensis strain of magic mushroom may be one of the most popular hallucinogenic mushrooms in North America.

SKU: 2133669 Category: MAGIC MUSHROOMS Tag: Magic Mushroom
Originating from the Siem Reap region of Cambodia, the Cambodian Cubensis Magic Mushrooms are a potent strain of shrooms that can yield users euphoric psychedelic effects. Its visually distinct effects makes it one of the most popular magic mushrooms in the Canadian market today. 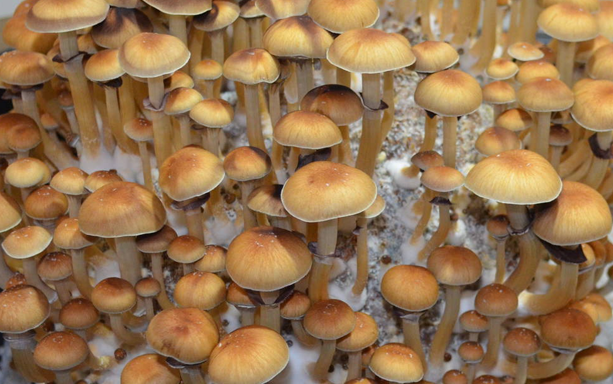 Unlike the Penis Envy strain of shrooms that lead to very intense trips, Cambodian Cubensis provides a more visual experience, limiting its effects only to what you see instead of all 5 of your senses. The strain is heralded as one of the best for taking on campsites or in chilled out social situations, and is generally safer to consume than more intensive strains.

A Pleasurable Experience with Cambodian Cubensis

The Cambodian Cubensis strain of mushrooms, while safe in most cases, aren’t totally risk-free. Some users have reported side-effects of nausea from the strong visual stimuli. Anxiety can also be a problem depending on your stress tolerance in a normal day of life. We suggest taking the strain with a sober friend near you in case they need to provide any reassurance.

The Highs and Effects of Cambodian Cubensis

The Cambodian Cubensis shroom strain yields a decently mellow high, with strong visuals and somewhat of a body buzz. It provides a lot of energy, sometimes inspiring users to get up and get chores done. The effects also last for a decently long time.

Generally speaking, proper dosage for all magic mushrooms is dependent on a user’s weight, whether the shroom is dried or fresh, and the level of experience the user is looking for (intense, mild, microdose, and so forth). Because the Cambodian Cubensis strain is reported to be on the more potent side of the spectrum, we recommend starting out with a lighter dose compared to other similar strains. 3g of dried mushroom usually does the trick for most people, but if you’re new to magic mushrooms, we recommend starting at a lighter dose around the 1.5g mark.

There are no reviews yet.

Be the first to review “Cambodian Cubensis” Cancel reply

STILL NOT SURE WHAT TO DO?

We are glad that you preferred to contact us. Please fill our short form and one of our friendly team members will contact you back.